My Evening With John 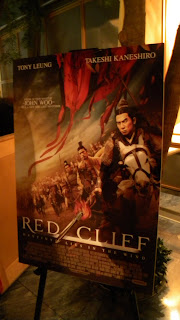 This past October I was notified by the wonderful people over at Subway Cinema (they run the NYAFF) of a 'special screening' that the Asia Society of NY was having of John Woo's epic "RED CLIFF". It was to be the premiere of the truncated international cut. What's more, is the master himself, John Woo, was going to be in attendance for the film as well as a Q & A. There was one caveat. Asia Society members only! Upon hearing this I clicked over to the Asia Society site, became a member, and requested a ticket. Asia Society's reply...."You snooze, you lose. Take care, brush your hair." (OK, so they said it more professionally but it was a door slam in the face none the less) Now, being a patron of the arts I had no problem joining Asia Society and donating money to their wonderful cause. But, in this instance, I was very upset that I wasn't going to be able to sit in on an evening with Mr. Woo. After a few nice emails from my girlfriend to the fine folks at Asia Society, they were happy to "release" a ticket to me for this sold out event. (I work overnight and sleep during the day and Asia Society was only available for customer service query's a few short hours during the day.....so....I know i'm lazy but in this instance I have an excuse for not following up and trying to score my own ticket. Sleep.) Greatest GF in the world I tell ya. As an aside, she just surprised me today with the Otto Chan Juk-tiu directed Category III flick KEY TO FORTUNE. What do ya say about a girl like that? Simply the best! 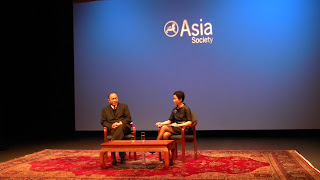 I'm a gwailo from the 'burbs so I hopped the LIRR into Penn and hoofed it on up to the upper east side where Asia Society is located. Park Avenue. Arnold, Willis, Kimberly, and Mr. Drummond lived on Park Avenue too! Asia Society is a wonderful place. The employees warm, inviting, and very helpful. I made my way into the theater and sat 2 rows up from the stage, just off center where "V.I.P.'s" where going to be seated. The audience was largely Asian with a fair amount of gwailo sprinkled throughout. But as i've learned throughout my childhood, it takes different strokes to move the world, yes it does.....After a brief introduction by an Asian Society big wig....different strokely enough, a Caucasian woman, the film started. 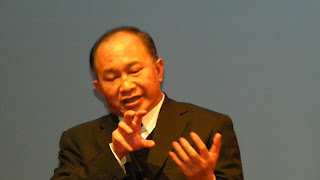 I had seen RED CLIFF parts 1 and 2 in their entirety before viewing this smushed together version and was hoping for the best, fearing the worst. To my surprise, little was lost in the pared down version. A few scenes of exposition were chopped but nothing memorable. The only notable cut was Vicki Zhao-wei's 'romance' with Tong Da-wei. This part of the film is missing with the exception of Zhao-wei kneeling over Da-wei's dead body. For those of us who have seen the intact version of RED CLIFF, we know who the dead body Zhao-wei weeps for is, so the impact on her character, as well as the audience, is much greater than the version presented. This scene in the cut version doesn't necessarily detract from the film though. There is still quite an impact in this scene as Vicki appears to weep for yet another unknown, needlessly fallen victim to war. 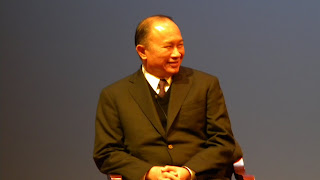 The International release of RED CLIFF was just as fine as the full Asian release. The film moved by at a clip, was overstuffed with action, and sure to satisfy John Woo fans the world over. It was even able to slap around and please a snobby HK film purist like me. After the screening, and subsequent standing ovation, it was time for John. A fairly large oriental rug was rolled out on to the stage. Two chairs, a table, and two glasses of water placed on top. Mr. Woo was introduced with Ms. La Frances Hui, who was to moderate the session. Another standing ovation, this time accompanied by camera flashes. I was giddy like a school girl. The Q & A went back and forth between Ms. Hui and Mr. Woo as well as the audience and Mr. Woo. I was way to nervous and beside myself to offer a question. John was gracious and funny with his answers. He seemed to not have a full mastery of the English language, pausing for what seemed like minutes to answer certain questions as Ms. Hui lead him to the end. The audience hung on every long awkward silence to find the right words. I clicked away, overjoyed. 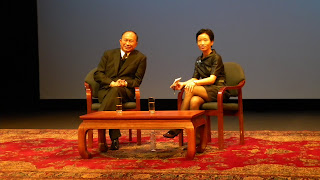 At the end of the Q & A the entire audience was invited to join John in a brief reception. Some people stayed, some left. Of course, I hung around. John was swarmed by people asking for pictures and autographs. Refreshments, ie. alcohol, were served. I had a glass of red wine or two...or three. It was around this time I transformed into an embarrassing fan boy. I was overcome with such joy that I was party to John Woo. I snapped away like a Japanese tourist. Jockeying for position like a paparazzo. Inching closer to John. Sweating profusely. I finally let my camera down, hanging around my neck. Reached into my messenger bag and took out one of my many copies of HARD BOILED I had brought with me, in hopes of an autograph. I was now face to face with John. I asked if he would sign my DVD. I handed him HARD BOILED and a Sharpie. Here is part of our exchange. Well, the parts that I remember anyway..... (i'm paraphrasing):
/////John: You know this scene in HARD BOILED? John points to the DVD cover. A climatic scene where Chow Yun-fat rescues a baby. With Chow Yun-fat and the baby?
Me: Y...Y.....Y.......yes. Stuttering like a nervous fool.
John: You know the scene in RED CLIFF where the...the...the.... John struggles a bit to find the right translation.....general saves the baby?
Me: Y...Y...Y....yes!
John: John proceeds in signing the DVD. I made Chow's character from the general. It is the same scene with the baby. That is where I got the scene in HARD BOILED from. /////
So, at this point in the night i'm wetting my pants because i'm conversing one on one with John Woo. It was a brief exchange that felt like an hour. John often paused and searched for words and I even finished sentences for him. After he signed my DVD I asked a random Asian girl if she could take a picture of me and John. She seemed a bit put out but decided to oblige me. Bitch. Our picture was taken. But of course, the flash didn't go off. Only me folks......only me. But I still cherish my dimly lit, almost indiscernible "Me and John" pic. If I don't tell people it's John Woo they just think i'm rubbing elbows and smiling wildly with some aging Asian fellow. I hung around the event a little while longer. I took some more pics. Maybe a little more than most people. I looked over to a secret service looking type dude who gave me the stink eye and the "cut it out" hand gesture; hand slicing angrily across his neck. I realized my night was over. I had another small glass of red. John and his small entourage exited stage left. I went right. Down to Penn to wait for the 12:14 back to the 'burbs. 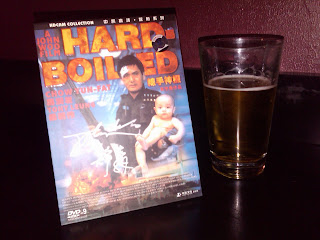 Above is a pic of my HARD BOILED DVD signed by John Woo. Next to it is a pint I had at T.G.I.Friday's in Penn while waiting for my train. Below I posted an embarrassing fan boy/ paparazzi like video I took of John at the RED CLIFF after party. So embarrassing. Enjoy. Did I mention that I embarrassed myself?
Visit Asia Society here: http://www.asiasociety.org/
Visit the Subway Cinema blog here: http://subwaycinemanews.com/