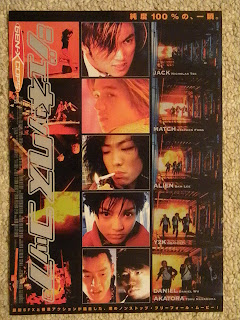 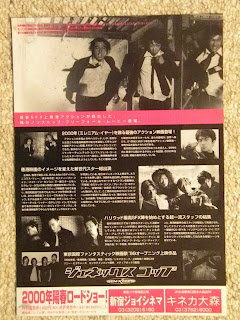 Japanese mini poster for the 1999 Benny Chan Muk-sing action pic GEN-X COPS. By no means a great movie but a fairly entertaining one, and at the time of release, was very accesible to even non-asian film fans. I recall seeing it in video rental stores as well as music/movie stores for a fairly reasonable price. As per HKMDB the film grossed more than $15 million in HK, thus unfortunately spawning a sequel. The sequel, GEN-Y COPS, however, is almost so bad it's good! Edison Chen, before he became an amateur nude photographer, stars in the film and his performance is just god awful. Maggie Q is also in GEN-Y COPS and the only reason to watch....next to American actor Paul Rudd's wild hairdo. What is Rudd doing in this film? Hard times and needed money for rent? Smack habit? Vacation in Hong Kong? I have always been curious? Anyone know?
Posted by Kingwho? at Tuesday, March 16, 2010