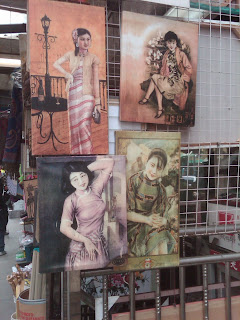 Last weekend my gf and I were traipsing around Chinatown shoppin' and a gabbin'. I took a few pics. Also some video that I posted a few days back. Below are pics of some store fronts, awnings, signs, and a knick knack or two I came across during my travels. I also spotted DVD copies of FIRE OF CONSCIENCE and A SIMPLE NOODLE STORY. Really professional and legit looking but of course boots. They were also lacking English subs. Anyway, above are a few vintage Chinese cigarette ads found at a one of the many gift shops on Mott St. I have also seen a bunch of these really beautiful cancer endorsing images on Ebay. 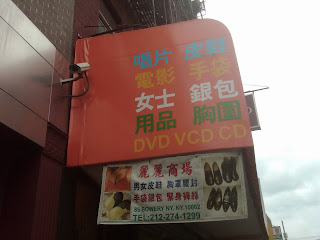 Shop on Bowery between Canal St. and Hester St. A fine mix of Asian Cinema and women's pumps. I usually skip this joint because it doesn't have much to offer and the prices are less than stellar. It's only a few store fronts down from my favorite C-town shopping destination, N.Y. Music & Gifts. 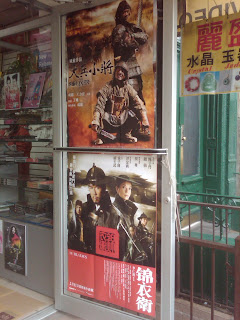 Front door to P-Tune and Video Corp. on Chrystie St., between Grand St. and Hester St. I mentioned this shop and have shown this door before which is always adorned with cool posters of mostly HK flicks. Today's posters are Jackie Chan's LITTLE BIG, SOLDIER and Donnie Yen's 14 BLADES. 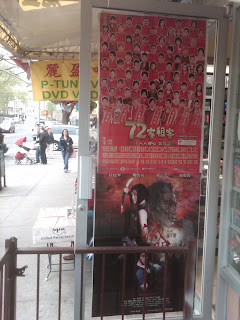 On the flip side. The other side of P-Tunes front door displays Eric Tsang's 72 TENANTS OF PROSPERITY and Simon Yam's BAD BLOOD. I (my gf) have enquired as to the owner floating some HK poster love my way. Alas, it wasn't meant to be. Some other Asian cinema lovin' dirtbags beat me too the punch and have ALL posters on reserve. Bastards! 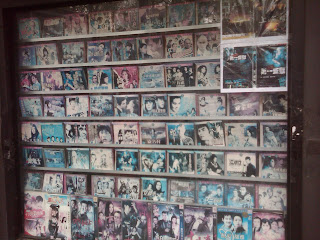 Chinese video store on Chrystie St., between Grand St. and Hester St. The store front window is chock full of sun damaged Shaw Bros. Celestial VCD's. This one kinda hurts my heart. Damaged VCD's. Sad face. I have yet to set foot into this store as it's a shady below street level rental joint with nary a gwailo ever entering. Plus, since it's a rental place, I don't really have much use for it. Maybe someday....someday. 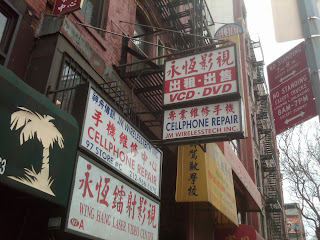 C-town signage above the rental joint I mentioned above. 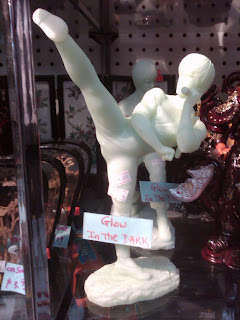 Great Martial Arts supply store on Mott St. Found this, and a few other, glow in the dark Bruce Lee statues. They also sell the ubiquitous dragon, tiger, Buddah, and Guan Yu statues that can be found everywhere in C-town. You can pick up a few cheap t-shirts here blazing a cool Shaolin Temple emblem. So you can intimidate other people into thinking you know kung-fu. You will be so cool. 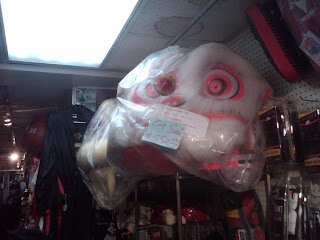 Same store that I mentioned above, on Mott St. This grand Lion head adorned the back wall of the shop. A bunch of gwailo were chatting up one of the proprietors asking about martial arts forms and practice as I looked over their limited section of Kung Fu DVD's. Mostly booted stuff from Taiwanese Company, Bonzai Media Corp. They are a shaddy company but I will admit, the product they put out are actually of very good quality. 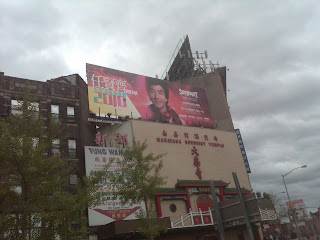 And now, Ladies and gents. Without further ado. Live....at the Manayana Buddhist Temple....the silky smooth like almond milk vocal stylings of Richie Ren Xian-Qi! Ok. Not really. Billboard on top of the Manayana Buddhist Temple at the intersection of Bowery and Canal, overlooking the Manhattan Bridge opening. As per the billboard, Richie will be performing at the Showboat Casino in Atlantic City, May 9t @ 1pm. Be there or be square. In the past years this Billboard has announced many a Chinese concert in AC for the Chinatown denizens to travel to by C-towns triad run bus companies. Oh how the masses have enjoyed the sweet voice of Leon Lai Ming and the peacock plumage costumes of Aaron Kwok frolicking in their own backyards over the years.....