VCD's? Look at these 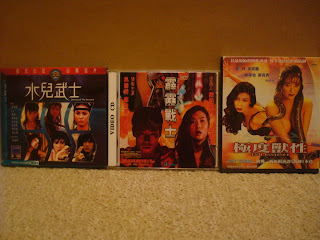 A few more VCD's from my seemingly never ending collection. Do yourself a favor and seek out the 1985 Shaw Bros. action/fantasy JOURNEY OF THE DOOMED. It is one of Cha Chuen-yee's first films and it is odd and excellent. It lists a who's who of HK stars, some in their career infancy. Stephen Tung-wai, Kara Hui Ying-hung, Max Mok Siu-chung, Tony Leung Ka-fai, Margaret Lee Din-long, and Alex Man Chi-lung are a delight to see in this fantasy piece. The film also has some ninnies in it. Give it a go! FUTURE HERO is another oddity. Featuring Mark Cheng Ho-nam, Ng Suet-man, and Mak Tak-law, this is one of only a handful or so of science fiction related films to come out of Hong Kong. It is a sleek looking film co-scripted by the very good heyday director, Poon Man-kit. EVIL INSTINCT is a fun and somewhat memorable (well, too me anyway) CAT III mystery/thriller starring Carrie Ng Ka-lai, Bowie Lam Bo-yi, Stuart Ong, and the lovely "Mystical Breasts" Diana Pang-dan. I think this was the first Pang-dan film I saw? I remember reading about her "mystical breasts" and how she could give Amy Yip Ji-mei a run for her $ in the upper torso area. Indeed she does, and like Yip, she maddens the horndog viewer, forgoing full on toplessness with shots of side boobage and hands over the nips. It is all silly and unnatural looking to the film but it still some skin! She does it in EVIL INSTINCT. It's quite funny actually. 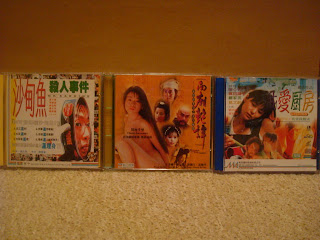 After is first film, the high spirited action/comedy PINK BOMB, director Derek Chiu Sung-kei made this wonderful small film from 1994 that kinda flew under the radar. Director Derek Chiu Sung-kei is a fine filmmaker and can work low budget, as he does here, or big. Comedian Dayo Wong Chi-wah, Irene Wan Pik-ha, Wayne Lai Yiu-cheung, and the excellent Liu Kai-chi star. This is relatively unknown, outside of die hards, but it's a fun piece of independent-like HK cinema. There have been a few incarnations of ROMANCE OF THE WEST CHAMBER. This is but one of them. The classic Chinese erotic novel shown here is a low budget affair with a boat load of flesh and some silly sepia toned sequences where little Jimmy Wong Shu-keu gets to make weird faces as he sexes youg Tang dynasty tang. It is what it is. KITCHEN is a 1997 offering from art house filmer Yim Ho. I have seen a few Yim Ho movies over the years and they are not my cup of tea. Going on a recommendation by a friend I gave KITCHEN a go. It, like many a Ho film, was not to my liking. Though, I must say, that the performance of Law kar-yin, who plays a transsexual, is still in my memory months later. I was hoping to enjoy KITCHEN as I had heard it was a tad off the beaten path from Ho's other works. It was, but I was unimpressed. Also, an honorable mention to the few brief scenes with the just damn awesome Karen Mok Man-wai. Laugh out loud funny. So with Law and Mok, I guess not a total waste of time?