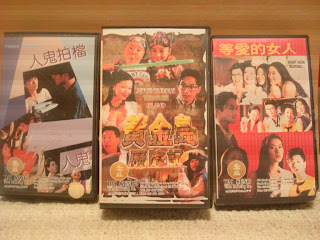 A few more VHS from my collection. HAPPY PARTNER aka HAPPY TOGETHER is a 1993 horror/action/comedy hybrid directed by Do Hoi-sang. The film stars Loletta/Rachel/Loletta Lee Lai-chun, Chin Siu-ho, Ku Feng, and my favorite Hong Kong happy man Charlie Cho Cha-lee. This film is high up in my queue but I have yet to watch it. I have recently unearthed a dozen or so heyday Charlie Cho flicks and I hope to watch this one after the rest of the bunch. Do Hoi-sang has only directed 2 other films, 1994's BLOODY BROTHERS and WAI'S ROMANCE (the latter is one of the Charlie Cho films I recently discovered), and upon watching HAPPY PARTNER my life shall be complete. ADVENTUROUS TREASURE ISLAND is a kid comedy/fantasy from 1996 starring chunky child actor Kok Siu-man, Sik Siu-lung, Ng Man-tat, Lam Suet, Shing Fui-on, Emily Kwan Bo-wai, Wong Yat-fei, and the nubile Vivian Hsu. The film is co-directed by Herman Yau lai-to. Ok. So. Now. You have a CAT I tyke fantasy film directed by one of the most prolific 'adult' oriented directors out of Hong Kong. Really? That's a hard sell. There are maybe a handful of Yau's films that I haven't seen yet. This is one of them. I'll get around to it someday. Another film I have yet to watch, Joe Hau Wing-choi's 1994 female drama RIGHT HERE WAITING. I have been told by a friend that the film is very good. I might have to take his word for it. I have struggled through a bunch of Joe Hau Wing-choi's catalog and have only enjoyed 2 of his offerings; the ostentatious 1995 CAT III flick PASSION UNBOUNDED starring Carrie Ng Ka-lai and the strangely erotic PHANTOM OF SNAKE from 2000 starring the slithery stylings of Cecilia Yip Tung and Jade Leung Chang. In my opinion director Hau is a cheap hack. So, RIGHT HERE WAITING will have to continue to wait until I'm extremely desperate. 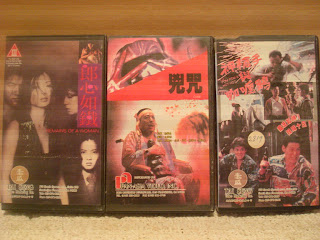 Remains of a Woman, Curse, Pom Pom and Hot Hot

REMAINS OF A WOMAN, which is based on a real life warped and depraved HK crime scene, is a 1993 CAT III production from director Clarence Fok Yiu-leung. Mr. Fok is a hit and miss director who hits bulls eye here with this eerily filmed gem. Two of his earlier films, THEY CAME TO ROB HONG KONG and THE BLACK PANTHER WARRIORS, were almost unwatchable for me. A few months back I put up the poster for THE BLACK PANTHER WARRIORS. Kick ass poster. Shit film. I have two tai Seng VHS copies of REMAINS OF A WOMAN but the better of the two is pictured here. The other tapes cover art looks to have been gnawed by some Ebay sellers pet gerbil. But it came from a smoke free home! So I guess it evens out? Just look at that CAT III symbol in the upper left corner. I love you CAT III. Yes I do. Yes I do. You little scamp. I'm sure ya'll know that LEGAL INNOCENCE, directed by the great Cha Chuen-yee and starring Francis Ng Chun-yu, Cecilia Yip Tung, Ivy Leung Si-man, and pockman Anthony Wong Chau-sang, was released the same year and based on the same exact case. And if you don't know now you know. CURSE aka BLOOD SORCERY is a fun 1986 spooky spooky film filled with Southeast Asian sorcery shenanigans. The late Kwan Hoi-san and Ku Feng can be seen here as well as a fair smattering of skin. Good fun! And on to POM POM AND HOT HOT aka POM POM AND HOT HOT. The film kicks ass whatever you call it! Character actor and sometimes writer/producer/director Joe Cheung Tung-cho (he looks like a kindly uncle) directs this fun filled actioner starring Jacky Cheung Hok-yau, Stephen Tung Wai, Rachel/Loletta/Loretta Lee Lai-chun, Alfred Cheung Kin-tin, Bonnie Fu Yuk-jing, and Lam Ching-ying. The character list goes on and on. It's a delight. Tung Wai not only stars but he and Benz "I have a cool name" Kong To-hoi action direct this fun fueled buddy cop flick. I'll spare the synopsis because I know ALL of you have seen it before. Many times. Or you wouldn't be here. I recently saw a poster for the film and I'm hoping to get my hands on it.