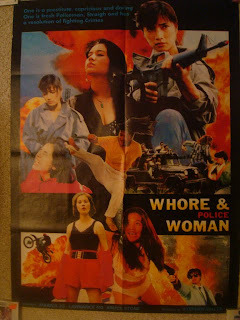 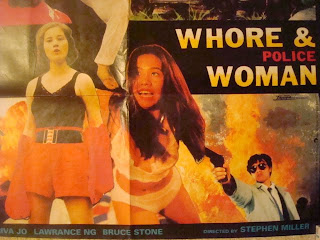 Here is a very cool Pakistani poster I have for the 1993 CAT III chippie-actioner
WHORE AND POLICEWOMAN aka WHORE & POLICE WOMAN starring the tough and lovely Michiko Nishiwaki, Julia Cheng Yim-lai, the late great Kwan Hoi-san, and an appearance by my favorite booty snatcher, Charlie Cho Cha-lee. Director Wong Gwok-chue also directed Michiko in another cool CAT III flick, PASSIONATE KILLING IN THE DREAM. I admittedly don't remember much about WHORE AND POLICEWOMAN as I saw it years ago. I was going to try and dig out the VCD I have and give it a cursory rewatch for blog purposes but I was too lazy. I'm so tired and sore from hoofing it around the city this weekend. 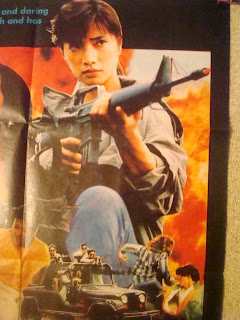 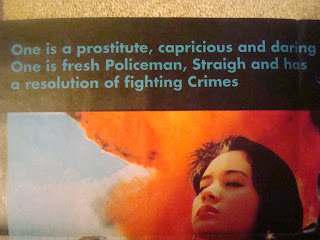 This Policewoman is a 'straigh' shooter!
Above is a great piece of flubtitling as the poster describes the Policewoman, Michiko Nishiwaki, as fresh and "straigh". The printer probably had his hand hacked off for this error. And a prostitute who is "capricious" and "daring"? Get out!? Also, below, according to Pakistani film aficionados, the director of this film is not Wong Gwok-chue but in fact Stephen Miller. He and his band provided the score to the film as well, including hits "The Joker" and "Jet Airliner." OK. OK. I kid. I kid. 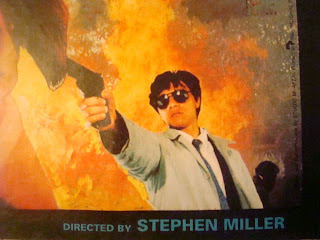 Wong Gwok-chue is also known as Stephen Miller in Pakistan. He also sang the 1982 hit Abracadbra.
Posted by Kingwho? at Sunday, April 18, 2010