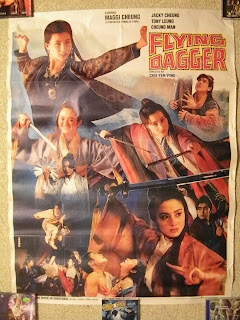 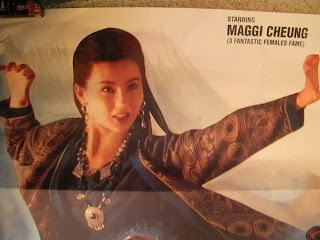 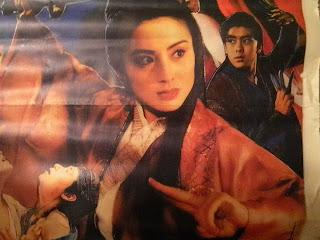 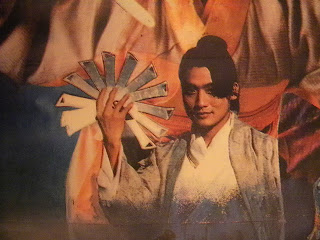 Pick a card, any card 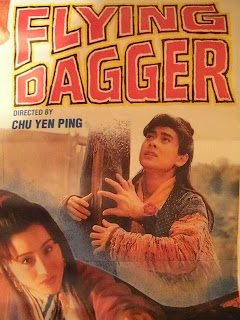 Here's another Pakistani poster that I have to go along woth my TIGER ON THE BEAT poster I showed you a few days back. While this one has a bit less going on it's still pretty nice. The images don't appear to be painted as in the TIGER ON THE BEAT poster but there is definitely an artsy transfer. As you can see in the second pic, Maggie Cheung's name is spelled wrong, missing the 'e'. Also, under her misspelled name, in parentheses it says, "3 Fantastic Females Fame." I assume that "3 Fantastic Females" is the Pakistani name for the Johnnie To Kei-fung directed THE HEROIC TRIO, which was released in 1993 a few months before FLYING DAGGER. FLYING DAGGER is an off the wall martial mo lai tau from 'everything but the kitchen sink' writer/director/producer Wong Jing and the 'off of his damn rocker' Taiwanese director Chu Yen-ping. A match made in HK hybrid heaven. The film flies by with all sorts of odd goings on and the actors seem like puppets on these mad men's strings. The love of my life (my gf is ok with this) Maggie Cheung Man-yuk, Jacky Cheung Hok-yau, Tony Leung Ka-fai, Sharla Cheung Man, Jimmy Lin Zhi-ying, Gloria Yip Wan-yee, Ng Man-tat, and Kingdom Yuen King-tan run around this film with such wild exuberance, spouting spitfire dialogue at one another, making a claim that there is no other cinema like HK cinema . FLYING DAGGER boasts exactly what early 90's HK cinema was ALL about! Energy! Like a friend recently described the films of this era, "watching an HK movie is like watching an American movie on 2x fast forward." So true. My gf was brought up watching the films of this era but now could honestly care less about HK cinema. FLYING DAGGER though, happens to be her favorite or the one she most remembers. She had a crush on little Jimmy Lin Zhi-yang. This always makes me laugh. Little Jimmy.
Posted by Kingwho? at Saturday, April 03, 2010