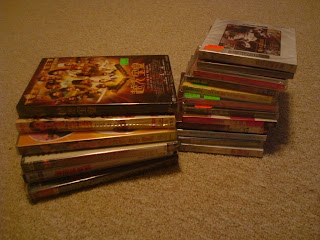 The gf and I spent the weekend in the city hitting up some fun, touristy spots. We were born and raised in NY but sometimes you would never know it? Pics with the Polar Bears at the Central Park Zoo, hooking up with My Cousin Vinny....Van Gogh at the Metropolitan Museum of Art, watching the 'Ned Beatty' scene from DELIVERANCE and giggling like a school girl at the Museum of Sex (porn = hooray!), shopping at the South Street Seaport and Pier 17, walking the Brooklyn Bridge, and ending up at our old comfort haunts in C-town. Big Wong's for lunch, The Original Chinatown Ice Cream Factory (to round out my full c-cups), and shopping for HK movies. Now that's a way to finish off a weekend.

I didn't buy too much this time out. I was in C-town about 2 weeks ago and stock wasn't replenished. I managed to get my hands on two new flicks. The multi-directed 2009 comedy TRICK OR CHEAT and the much anticipated Jeff Lau Chun-wai film parody JUST ANOTHER PANDORA'S BOX. Now, I've mentioned before that I don't advocate bootlegs and if i do happen to come across/ purchase one I will ALWAYS buy the original. So, seeing as JUST ANOTHER PANDORA'S BOX was just released I understood going in that this was a booter. But it was a nicely displayed boot that 'claimed' to have English subs. Alas, I get home and throw the flick on to see the quality and....wouldn't ya know it? No subs. The transfer blows as well. Not the first time I have been conned by Chinatown. Oh, Chinatown! You bitch whore! 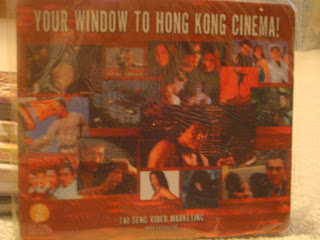 Also picked up an old mouse pad from Tai Seng Entertainment. This find was about a buck in the bargain bin at NY Music. I'm sure upon initial release it cost $40 bucks. A little Tai Seng humor.