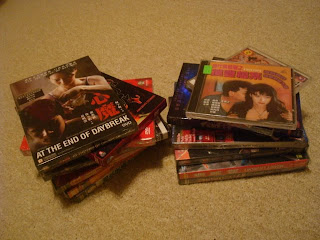 Picked up a few more movies in C-town this past week. Hit up the usual joints and brought home some pretty good stuff. Among the goodies are a DVD of AT THE END OF DAYBREAK, starring Kara Hui Ying-hung in her multiple award winning 'comeback' role. Can't wait to watch this one! Also picked up a legit DVD copy of Eric Tsang Chi-wai's 72 TENANTS OF PROSPERITY, and DVD's of the CAT III Taiwanese ghost drama AMAZING STORIES and Kevin Chu Ga-wang's nudie drama MY WIFE'S LOVER. Also a few bargain bin DVD's including Anita Yuen Wing-yee in the Japanese produced HONG KONG NIGHT CLUB, Sylvia Chang Ai-chia and Josie Ho Chiu-yee in FOREVER AND EVER, Karel Wong Chi-yeung and Lily Chung Suk-wai in the ultra low-budgeter BE OUT OF CONTROL, and 2 buck copies of Fruit Chan Goh's HOLLYWOOD HONG KONG, Ray Lui Leung-wai, Mark Cheng Ho-nam, and Alex Fong Chung-sun in GUNS OF DRAGON, and the Jade Leung Chang's crap fest MONEY LAUNDRY. I have the last three in my collection already but I couldn't pass them up for only $2.

Not much on the VCD front though. Only 3. Did find a nice VCD 's of Pauline Chan Bo-lin in A WILD PARTY and Johnnie To Kei-fung's debut flick THE ENIGMATIC CASE, starring Damian Lau Chung-yan and the lovely Cherrie Chung Cho-hung. I also picked up an untitled CAT III period piece. Will have to do some research on it to figure out the title, but since it's CAT III, the research should be fun!

And on the "Damn you Chinatown! You did it to me again!" tip, I picked up what appeared to be a legit copy of Zhang Yimou's A SIMPLE NOODLE STORY containing English subs. But English subs were no where to be found. I shake my fist at you C-town! But how can I stay mad at you? Look at that punum! 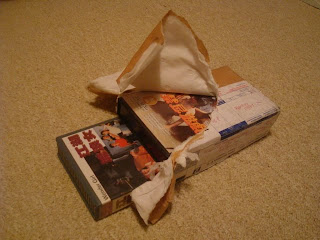