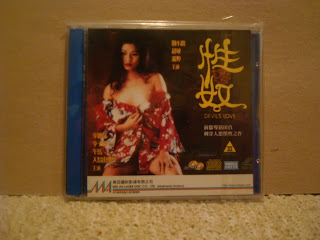 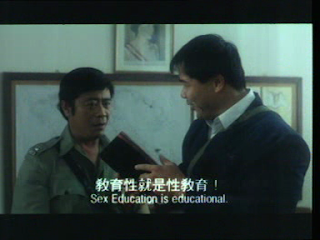 My last post showed the lobby card's and film rating certificate for the 1992 CAT III flick DEVIL'S LOVE and here are a few screen shots and a few words about this pooper. I believe this film is a bit hard to find, but I could be wrong. And usually am. But DEVIL'S LOVE is kind of fascinating. It appears to be a mishmash flick where two unrelated and unfinished films were smushed together to make a quick buck. And one of these unrelated films is teaming with teats so that quick buck is a bit soggy. A few of these types of productions cropped up around the early 90's as HK cinema pumped out movies like some might pump their fists to certain scenes in DEVILS LOVE. Be it good business or bad, the name of the game was to make moolah. This type of odd ball production only enhances the charm of DEVIL'S LOVE. 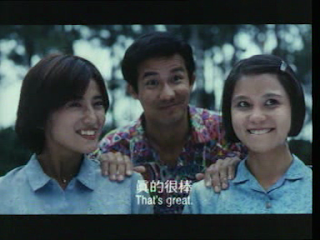 Matching somewhat bankable stars in Yukari Oshima and Waise Lee Chi-hung, with an old favorite like Wu Ma, and coupling them with out of left field scenes of copulation, equals a winner in my book. An odd choice of title, DEVIL'S LOVE sounds a bit too hard edged for the proceedings. The flick also goes by the more logical title (!?), HIS WAY, HER WAY, THEIR WAYS, in what appears to be a nod to the Alfred Cheung Kin-ting HER FATAL WAYS series, as well as its spin off, HIS FATAL WAYS. This seems more apropos as the film is more of a goofy fish out of water/country bumpkins come to the big city kinda comedy.....with some bangin' thrown in for the fans.
, 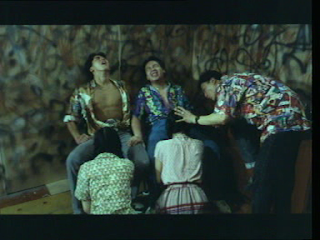 Waise and Yukari are HK cops that team up with a few of the mainlands finest, Wu Ma, Frankie Chan Chi-leung, and Sarah Lee Lai-yui. The team are out to find a gaggle of girls kidnapped from China, shuttled to HK and hustled into prostitution. There are a bunch of scenes that point to the mainlanders being out of touch with the real world. We have seen this countless times before in similarly themed movies, but some scenes score big laughs. Case in point are the screen shots provided below. Wu Ma and Frankie Chan Chi-leung mistake Yukari's vibrator for an electric toothbrush and proceed to brush their teeth, vibrating away. Now, this scene only works because we surely believe that Yukari would leave her love toy in the toothbrush cup on the bathroom sink. That's where I keep mine. Entirely silly but very funny. 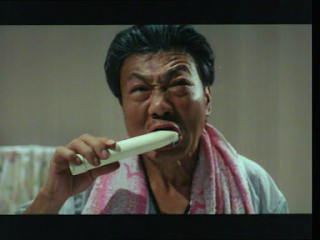 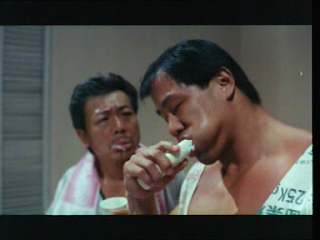 You're not doing it right! You gotta really jam it in there! 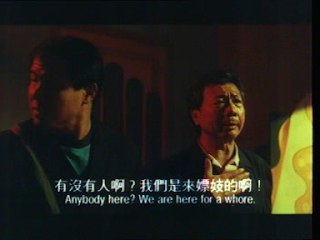 And now for something completely different! A handful (pun intended) of totally out of place sex scenes are injected into the storyline and show the kidnapped mainland tarts gettin' the dirty down below from their captors. These scenes are completely out of jibe with the rest of the film and poorly inserted to capitalize on the CAT III craze of the early 90's. These sleazy scenes were probably lifted from another failed production. They are cheap and unsubtitled. The same set is used as well. A screen shot is shown a few pics above. As you can see the walls are graffiti sprayed in a Jackson Pollockesque style. Very classy. 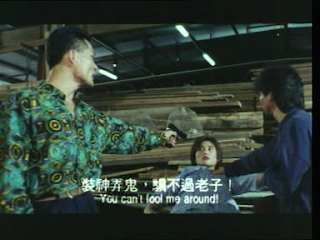 The film clocks in at about an hour and twenty minutes so it's a quick one that doesn't linger too long. The nookie scenes are drawn out so you can fast forward through some of the naughty bits. It's ok. I won't look at you any different. This is clearly my favorite era in HK cinema and when I discover a film from this manic movie making period I go ape. These films are unabashed. DEVIL'S LOVE has a touch of it all. Comedy, action, boobies, and even a dance number thrown in!? Fun and sleazy silliness.