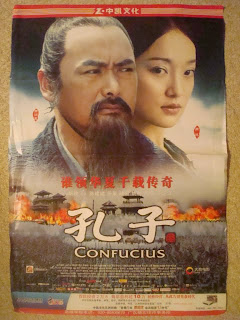 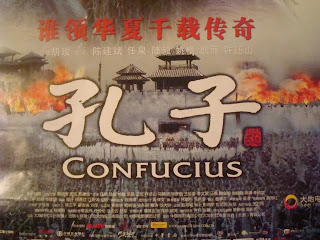 Poster for Hu Mei's 2010 mainland production, CONFUCIUS, starring everyone's favorite actor Chow Yun-fat. How can you not like him?! The film feels a bit insignificant for such a significant character. Director Hu Mei enlivens the life story of Confucius with a few battle scenes spread out in between the philosophers trials and tribulations. If I never see a battle scene in a Chinese movie that has thousands of arrows piercing the sky at one time again, it will be too soon. CONFUCIUS does boast some beautiful scenery of China throughout the film and Chow stoically plays the scholar wonderfully. I'm not sure I could picture another Chinese actor in the role? His presence elevates the film into something of interest. Zhou Xun, a fine actress in her own right, is underused and only seen briefly. Admittedly, I know little about the life of Confucius so I was excited to see one of my favorite actors take on the role. I could watch Chow and maybe pick up a little on the life and times of the man who spawned thousands of fortune cookie fortunes. A win/win. The life of Confucius can't be trivialized into a 2 hour film and this is, in part, where the film falters. As per Wikipedia (forgive me for quoting Wikipedia), the film was criticized for it's "inappropriate levels of action." Though I was taken aback by this as well, the scenes make sense in the context of the era the film is portraying. The waring periods affected Confucius' life greatly and created a depth of character in the film that without would have made the life portrayed on the screen seem bland and really not worth philosophizing about. Chow, once again, does a wonderful job. He is ever watchable. 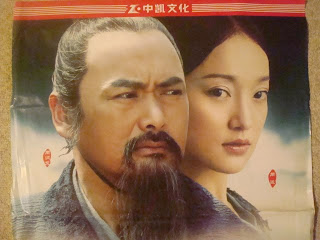 And now for a Bullets Over Chinatown low brow moment: Confucius say, man who come into money have sticky financial situation.