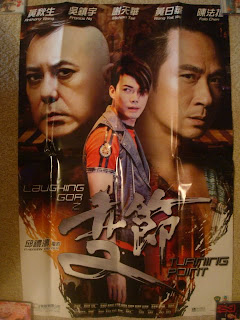 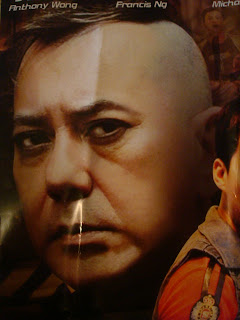 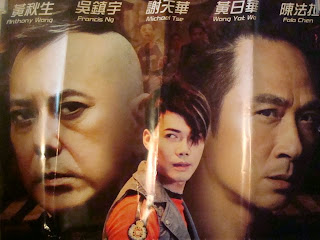 Poster for Herman Yau Lai-to's gangster drama LAUGHING GOR-TURNING POINT. I'm sure you know that this is a film prequel to the wildly popular TVB drama Turning Point staring this films co-star, Michael Tse Tin-wah. Along for the ride are HK scene chewers Anthony Wong Chau-sang, Francis Ng Chun-yu, and the mayor of HK cinema Eric Tsang Chi-wai. Also in a brief appearance is the great Yuen Biao. A strong film on it's own, you don't have to go into this piece having seen or knowing anything about the Turning Point tv show. Though, if you have already been invested in the characters for months and months of tv drama watching, you might get a tinge more from this work up. It's a bit of tired story involving undercover coppers as well as questionable triads but Yau's taping of HK cinema stalwarts Wong, Ng, and Tsang keeps the blood life flowing through this great genre entry. The poster is kinda crapped up by the terribly awesome folding job. I shall dub this origami like crease job "The Chinatown Fold." "C-town Fold" for short. I have a ton others that have suffered a similar fate. This poster has since been rolled to hopefully aleviate some of the damage. I will overlook this print ruining deed as it was done by my favorite Chinatown film store proprietors over at NY Music & Gifts on Canal and Bowery. Best movie store in C-town. They keep the HK cinema love rolling, or folding, my way.