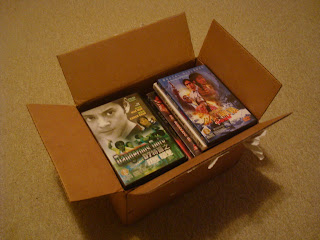 Ms. Mail Lady brought a new box of HK goodies today. When Ebay speaks, I listen. A bunch of priced just right DVD's came my way. A few doubles and triples (like I really needed another copy of THE UNTOLD STORY and CASINO) and a few new flicks to add to the collection. Some of the titles that are new to my collection are the Taiwanese comedy/actioner NO SIR, with Takeshi Kaneshiro, Jimmy Lin Zhi-Ying, and Richie Ren Xian-chi, romantic comedy I'LL CALL YOU, starring the 'other' Alex Fong (Lik-sun), Jacob Cheung Chi-leung's WHATEVER WILL BE, WILL BE with Aaron Kwok Fu-sing and Kelly Lin Wai-lam, the cheesy horror film DEATH MELODY starring Gloria Yip Wan-yee, and the low rent PTU knock off PTU FILE-DEATH TRAP. Above are some cheap ass titles that will more than likely collect inches of dust while sitting on my apartment floor. BRUTAL VIOLENCE and DEATH RIM both look and sound way cool. BRUTAL VIOLENCE stars the great Fan Siu-wong and Ben Ng Ngai-cheung and DEATH RIM stars one of my favorite HK actors, Mark Cheng Ho-nam. Unfortunately both are shot on video shit without subs. That equals me not watching them. FENG SHUI AND GAMBLING is another low budgeter but, I will admit, I have some interest in the film. It is directed by Ivan Lai Gai-ming, the director of some wonderful genre classics like THE BLUE JEAN MONSTER, DAUGHTER OF DARKNESS I + II, ANCIENT CHINESE WHOREHOUSE, THE IMP, and THE PEEPING TOM. FENG SHUI AND GAMBLING has a fighting chance to see the light of my DVD player. 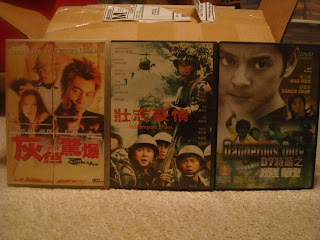 GRAY, WHAMPOA BLUES, DANGEROUS DUTY
GRAY is an artsy Taiwanese film starring Shaun Tam Chun-yin and the great Ti Lung. I have no idea what it's about but it cost 3 bucks and had Ti Lung in it. I win. WHAMPOA BLUES is a cool action/comedy that follows the 'police/military academy' formula. We've all seen countless films like this before but director Blacky Ko Sau-leung and stars Max Mok Siu-chung, Michael Miu Kiu-wai, Wilson Lam Jun-yin, and Kenny Ho Ga-ging keep the blood flowing through this genre pic. The music is from frequent Wong Kar-wai collaborator Roel A. Garcia, the script by the late, great Barry Wong Ping Yiu (writer of, oh let's see.....THE PRODIGAL SON, WINNERS AND SINNERS, HEART OF THE DRAGON, YES, MADAM!, MR. VAMPIRE, MY LUCKY STARS, MILLIONAIRES EXPRESS, RIGHTING WRONGS, EASTERN CONDORS, PEDICAB DRIVER, SHE SHOOTS STRAIGHT, PANTYHOSE HERO, ALAN AND ERIC, FIGHT BACK TO SCHOOL, CRAZY SAFARI, SLICKERS VS. KILLERS, TWIN DRAGONS and HARD BOILED. Need I go on?) To top it off, it's produced by Peter Chan Hoh-san. And finally we come to the shot on video bargain binner DANGEROUS DUTY:D7, starring Max Mok Siu-chung, Austin Wai Tin-chee, and a brief appearance by Charlie Cho Cha-lee. Has a chance only because of the inclusion of Cha-lee. Though I'm sure there will be no scenes of him giving it to some lovelies whilst wearing his trademark tighty whities.
.