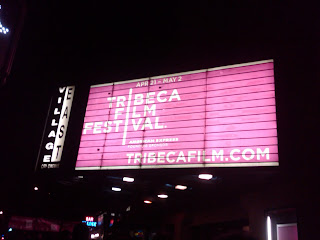 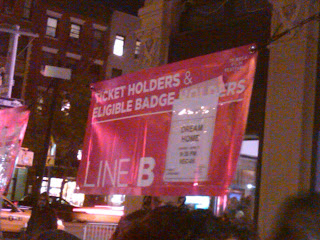 Two weeks ago I took the night off from work to trek into the city to catch a screening of Pang Ho-cheung's new HK thriller DREAM HOME. It was kind of impromptu as I only found out the screening was taking place about 36 hours beforehand. I labored a bit as to whether I should take the work night off but decided it would be a pretty cool experience seeing a much anticipated HK film release coupled with my first time at the festival. The film played for 4 nights. I caught the 3rd. 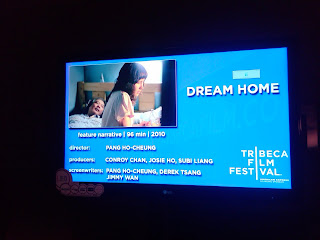 Screen outside of theater showing DREAM HOME
Hopped the LIRR and got into the city a bit early to putz around SOHO and C-town. I mentioned in previous posts about my time here doing some blog homework. Taking pics and video of HK/NYC filming locales. You've already seen the Four Seas Restaurant from A BETTER TOMORROW. Those pics and video were taken this day. Anyway, after doing blog shit, eating in C-town, and picking up some HK flicks, I hoofed it on up through the East Village to the Village East Cinema, one of the cinemas participating in the Tribeca Film Festival. 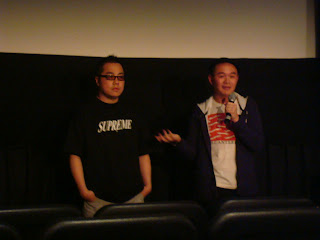 Pang Ho-cheung and producer/interpreter
It was unseasonably chilly and windy in NYC as I journeyed through the village. My face was en fuego from the cold air lashing me as I walked north. Of course it was my damn luck that the harsh wind was blowing from the direction I was travelling. It was nightfall and though the city is a heck of a lot more safe than it was in years past, it was still a tad shady. Even when the streets teemed with the cocktail hour crowd, I felt the need to hurry my pace towards the cinema. To tell the truth, I really love the element of the unknown and impending danger that enlivens this city. Go out for a film, might never make it home. Something poetic about it. I walked past a street that only 2 days prior found a HK film scenario play out in broad daylight. As I read in the NY Post, a deranged fella blasted some poor unsuspecting city dweller out for a Sunday stroll. Straight outta HK cinema. I hurried past with a strange fascination about this horrific event. 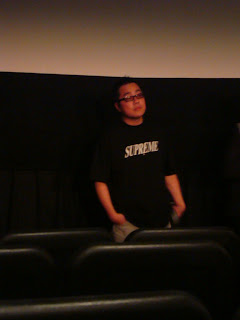 Pang Ho-cheung
I finally and happily made it to the cinema where there was a ginormous crowd gathered. As I wondered what else was playing I also prayed that this clamor wasn't for DREAM HOME. It wasn't. The movie LEGACY, starring Idris Elba (most known to me for being in the U.S. version of the TV show The Office) was having it's red carpet premiere with the stars and director in attendance. I walked passed the rush to will call to pick up my ticket. I rubbed shoulders with NY Post film critic V.A. Mussetto on the way. I wasn't 'semi-star struck' as I have seen him before at the NYAFF. I secured my ticket, bummed around and took pics outside of theater, saw Idris Elba show up (on crutches), sat in the 6 person long DREAM HOME ticket holders line, and waited in the frigid nighttime to get the hell into the theater. 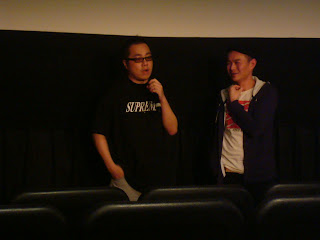 Finally entered the theater and sat toward the back. Some film fest lackeys came in to check on the rather meager crowd as the moviegoers took their seats. I overheard one lackey mention that the 'filmmaker' will be making an appearance after the film for a Q&A. This was a total shock and awe surprise to me. I shot a load of mush into my pants and moved my seat towards the front of the auditorium. I became a bit sweaty in anticipation. Such a wonderful surprise. A festival character stood before the screen, confirming that Pang Ho-cheung will be fielding questions at the conclusion of the film and requested that we enjoy the show. Glee. Smile as big as a satisfied cat. 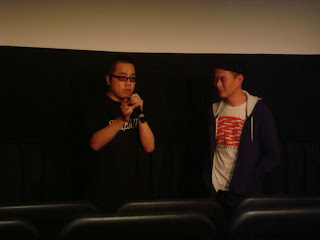 Pang Ho-cheung's DREAM HOME furthers his accomplishments as a gifted young filmmaker. I was not a big fan of his last two features, EXODUS and TRIVIAL MATTERS. Both films had spots of really great ideas and images that just never thrust to the surface. They are in no particular way terrible films but rather misfires. Films that simply 'coulda been' became disposable 'also rans'. Here, Pang presents a fun idea in the vain of my beloved early 90's CAT III shockers with a few images that equal some unshakable visions from those fun films. Pang, as seen in his previous features, is an inventive filmmaker. While he is not entirely successful in his storytelling as a whole, he succeeds more than not. This is also true of DREAM HOME. 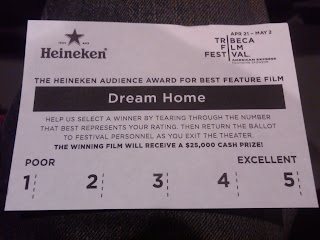 At first, lead actress Josie Ho Chiu-yee's psychological make-up troubled me as it didn't seem as fleshed out as I hoped. The story unfolds in a series of flashbacks and forwards that slowly peel back what makes her tick. Even as a whole, I still questioned her mental make-up. I dismissed this as I quickly referred to other notable psycho's from HK cinemas past. What made Bunman and Dr. Lamb tick? Possibly a seed planted early in their youth that carried them through their social struggles growing up into awkward outcast sociopaths that can only partly function in traditional society? Blame society as a whole? Whatever the answer may be, Josie's crooked frame of mind and reasoning for madness turn DREAM HOME into terrific and timely dark satire. My answers above, of course, are but a cursory questioning of a character study and there is so much more to explore, but the pieces of the puzzle fell into place for me and I became comfortable with Josie and her actions. And I loved every body fluid spewing minute of it. 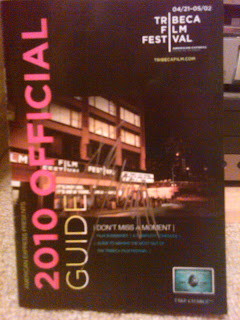 The major set piece of violence is exceptionally memorable. While the set up is rather long and a minor false blip in the pacing of the film, it is wholly entertaining, and the outcome is so damn worth the wait. I am still marinating in it two weeks later. I would never give anything away but the squeals, giggles, and "Ohhhhh's!" of delight from the audience proved positive as to Pang's success in DREAM HOME. It is no way a perfect film but you will get what you paid for. Most definitely. Below I have included two videos of the Pang Ho-cheung Q&A for you guys. I think you will enjoy them. Well, at least the last one. I have issues.
As I mentioned earlier, Pang Ho-cheung's appearance was a total surprise. I didn't have a DVD of one of his films on hand for him to sign, but he was nice enough to sign my festival program (shown above) and take a blurry picture with me. Good times.

Pang Ho-cheung's introduction after the conclusion of DREAM HOME. Followed by a question by one of the Festival jockey's to kick things off.

Ok. here I am asking a question to Ho-cheung. I had my camera set and ready with intentions of filming me asking him a question and getting his response. For blog posterity of course. But, like in other awesome situations I sometimes find myself in, I moistened my drawers further as I was giddy like a little schoolgirl. When my raised hand was chosen for the next question I became panicky and, like my usual idiot self, dropped my camera into my lap as I asked the a question, forgetting that I was filming. The camera remained on and you get to hear my question and Ho-cheung's answer. It was a happy/lame-brained accident. It was also a pretty great exchange as he spoke to me directly, asking if I understood what he was saying as I shook my head yes and cackled to his answer. I had no clue to the majority of what he was saying but I picked up on his mention of Anthony Wong Chau-sang and the names of the films THE UNTOLD STORY and EBOLA SYNDROME.
Posted by Kingwho? at Sunday, May 09, 2010