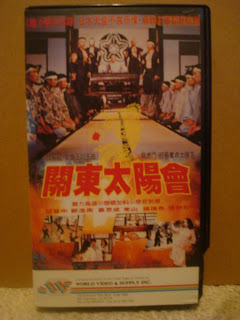 Above is a pic of a VHS oddity from my collection. Ok, so the pic isn't great (my camera is outdated) but I'm having difficulty placing the film? The title of the movie is "RENDEZ-VOUS OF JAPANESE KANTO". It stars Mark Cheng and Sibelle Hu and appears to be a Hong Kong/ China co-production maybe around the early to mid 90's. Sibelle Hu disappeared around the mid 90's and Mark Cheng has long hair in this one. If that helps any? 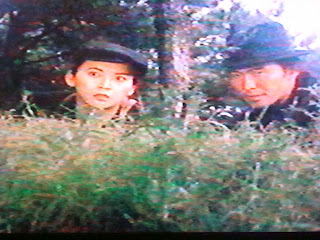 The plot is a bit tired and concerns those pesky evil Japanese and their occupation of China around the days of WWII. The film isn't terribly low budget but just enough to have it's silly moments. The action is quite decent though. A few nice fight scenes. Even a "little person" gets in on the action. The film also allows for Mark Cheng to show off his great kung fu skills as well. And of course the Chinese win in the end. Hooray! 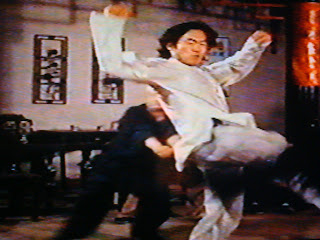 I've tried cross referencing the film, figuring the title might be an alternative one, but nothing comes up. Then again i'm lazy so maybe I didn't do enough to answer my query. Anyone have any ideas? All two of you who visit this blog!? Can you ask around? Ask your moms. Dads. Grandparents. Thanks. 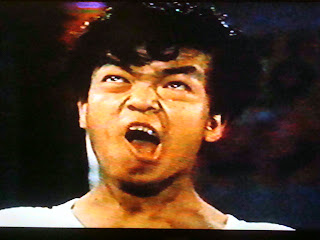 Little person bites it!
UPDATE: Thanks to hkfilm.net for correctly identifying the title of this film. It's actually a Taiwanese film from 1993 called, "THE SUN SOCIETY". Thanks again to hkfilm.net. Visit this great HK cinema review site here: http://hkfilm.net/