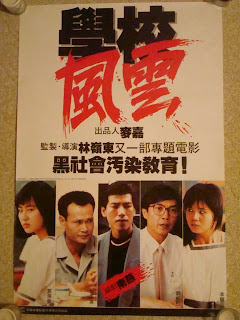 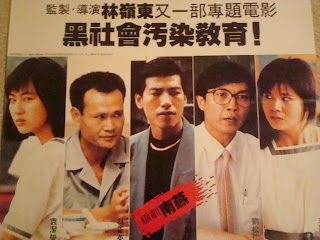 Ringo Lam's masterpiece "SCHOOL ON FIRE" is a social comment on the way things were in the British colony circa 1988. The last of Lam's "On Fire" docu-dramas smashes the weathered ideals of the triad world with high school innocence. Done with Lam's ever present grime and grit, the film's sweaty realism is blasted on to the screen. The finger of blame is pointed at all involved, even the viewer isn't spared. The young culture represented in "SCHOOL ON FIRE" are groomed to believe that life depends on money and power. A very capitalistic view makes sense in a capitalistic society. Of, course, as we have seen in countless triad movies over the years, the disillusioned "small potatoes" see the triad world as a springboard to easy fame and fortune. Their transition is aided by their parents monetary woes and the surrounding squalor in which they live. The film has formed the foundation of a genre of "triad boys" films. i.e. The Young and Dangerous series and countless other 'young punk rising through the ranks' triad opuses. It offers tremendous insight into triad society and the society outside that relies on these "bad" people in times of personal strife. Unflinching, you see what capitalistic ideals do to a culture of young people. With a single machete swipe, innocence is lost and replaced with sorrow and pain. What is so frustrating, and ultimately sad, about "SCHOOL ON FIRE" is there seems to be no way out. All roads lead to a dead end. Made arguably during the best era in HK cinema, School On Fire is as violent as any film i've seen and it's power brutal and sobering.
Posted by Kingwho? at Monday, January 04, 2010