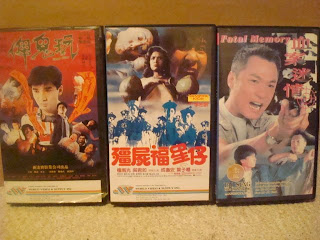 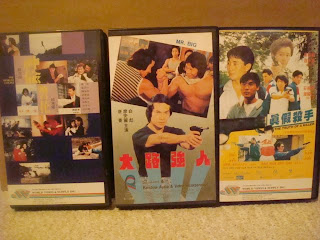 The Trouble Couple, Mr. Big, The Truth of a Killer 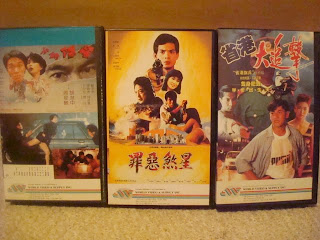 More HK VHS from my collection. Some obscure titles but unfortunately a few of them aren't subtitled. Does it make anyone else angry when the box clearly lists the film as having English subtitles but when you throw the film on there aren't any? I have been trying to deal with this subtitle anger issue for over a dozen years now. It throws me into outrageous fits of anger. I tend to break things. Followed by gentle sobbing in a fetal position while sucking my thumb and holding myself. I've tried 12 step programs before but could never get past step 3. Step 1 was simple, admitting that I am powerless over Hong Kong Cinema and that my life has become unmanageable. That is obvious. Step 2 was fairly easy as well, believing that there was a power greater than myself that could restore me to sanity. OK. I can admit that. But step 3 is where I falter time and again. Making a decision to turn my will and my life over to God as I know him. No. I can't do it. I could only see turning my life over to maybe.....Billy Tang as I know him? Maybe Otto Chan? Damn step 3!!!
Posted by Kingwho? at Friday, January 15, 2010