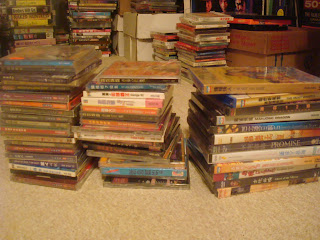 I was in Chinatown this evening with my gf and her cousin, (we'll call my gf's cousin "R". There might be a future post about "R" and an unfortunate HK cinema incident that she was party to), having dinner at our favorite restaurant Big Wong King. Before meeting up with "R" we hit our usual HK dvd/vcd hotspots so I can blow some money that I should be saving. But anyway, above is a pic of tonights score. 49 flicks total for roughly 110 bucks! You can't beat it! Tonight's haul includes a few doubles and triples, movies I own already but in different formats. A handful of Shaw Bros. vcd's including THE WANDERING SWORDSMAN, CARRY ON DOCTORS AND NURSES, and HELL HAS NO BOUNDARY. The 1974 Brigitte Lin horror/fantasy GHOST OF THE MIRROR. Yet another vcd copy of FORSAKEN COP, unsubtitled of course but it was only 2 bucks. Couldn't pass it up. Also a Fortune Star "Legendary Collection" dvd of I WANT MORE...aka CONFESSION OF A CONCUBINE, which looks right up my alley. The only new film I was able to pick up was Danny Pang's SEVEN2 ONE. A mighty fine evening in C-town.